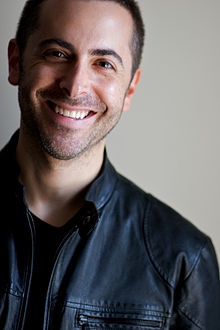 Since the troubling crime of Leopold & Loeb trod the boards of New York as a musical over ten years ago, its fame and success haven’t stopped growing not only in the USA, but also worldwide. Its author, Stephen Dolginoff, has become one of the biggest references of this new generation of dramaturges, who are determined to offer a new format within this genre, definitely more daring and risky. In this new interview for Primera Fila, Guillermo Názara Reverter meets the composer and librettist so he tells us about his start as a writer and his next projects, as well as all the secrets behind the scenes of Excítame (Thrill Me), the musical that “shakes” Madrid’s scene.

I’ve loved Musical Theatre since I was very young.  I was always involved in theatre growing up.  I used to work with a theatre that put on shows for children and families and they often did original musicals.   I was very aware of the process of creating the music and lyrics, which I found fascinating.   Since I played the piano, I would always experiment with creating melodies and it was only natural to start writing words too!

Can you tell us about how you started working in show business?

I was in the midst of getting a degree in acting at New York University, when I become bored and started realizing that maybe my true talent was in writing and composing.  So I wrote a musical in my spare time, and NYU decided to produce it.   I was sure at that point that I should transfer into the Dramatic Writing department, where I would eventually get my degree.

You’re one of the very few authors who can be credited for the score, lyrics and book of their shows. How do you manage to take all these tasks by yourself? Would you like to collaborate sometime?

It makes sense to me!  It means every aspect of the musical is filtered through one mind and one vision. Whenever “the lyricist” is ready to work, “the composer” is always there! I can’t imagine collaborating with anyone on a Project.  But you never know!

Which would you say are your biggest influences in your music? What about in your lyrics and dialogues?

I am influenced by all the wonderful writers and composers of Broadway. Some of my favorites are Kander & Ebb; Stephen Schwartz and Howard Ashman.

When you’re writing musical, what process do you follow? How do you build a scene? Do you start by writing the musical numbers or the dialogues instead?

It varies, depending on the project.  Usually I write an outline first, so I have an idea of the full story and the basic placement of the songs.  Sometimes I will write one or two songs first just to get a feel of the story and the characters.  But usually I just start on page one and move forward to the end!  When working on a song I always write the lyrics and as I do this, I hear the music right along with them.  So I really write both music and lyrics simultaneously.  Once the lyric is done, it’s just a matter of going to the piano and transcribing the melody that I already created (though sometimes it comes out a bit different than it originally sounded in my head!)

Thrill Me is by far your most acclaimed piece, both by critics and audiences. How did you come up with the idea of adapting a crime story to musical theatre?

I was looking to do a two character musical about a shifting power dynamic in a relationship; and separately I always planned to do a true crime musical.  When I came across the story of Leopold & Loeb, I realized I could accomplish both goals in one musical.

Though you’ve created a quite successful show, it’s quite unusual to hear of musicals about murder cases. Were you ever afraid the plot might not suit the likes of theatregoers?

If I had thought about it longer I might have been reluctant.  But I was so excited by the possibilities of musicalizing the story that I didn’t think too hard.    But there have been plenty of dark musicals that involve murder such as Phantom, Les Miz, Sweeney Todd, Assassins, etc.  So I decided I could be in good company.  It was difficult originally to get producers and theatres interested in doing the first production, so I had to wait a few years.  But once it was successful, it kept growing and growing.

You’ve also played the role of Nathan Leopold, one of the characters in Thrill Me, in the Off-Broadway production. What kind of challenge does it mean to play someone you’ve also created in some way?

It was very challenging.  But it was a wonderful experience.  I learned to appreciate actors more. I learned that it takes a lot of stamina to command a stage for 90 minutes and never leave.  I learned that sometimes it’s harder to sing high notes depending on where they are placed in the song and depending on what one is doing on stage.  These were all things I never had to think about before actually going on stage and performing my own work.  Its something I wish every writer could have the experience of doing.  It was probably the most exciting time of my life, playing Nathan Leopold in THRILL ME (and it wasn’t even my idea.  The producer asked me to be an emergency replacement!)

Since its opening in New York, Thrill Me has been staged in lots of cities around the world. If you had to choose one of the international productions, which one would it be? Why?

So far there have been over 100 productions in 15 countries in 10 languages. So I couldn’t possibly choose.  Every production of THRILL ME pleases me in some way.  And I am beyond thrilled that “EXCITAME” has returned to Madrid.  I think Alex and David and the entire company are doing marvelous work.

Apart from Thrill Me, you’ve also written other well-received pieces, such as Flames, which you’ve recently opened in London. Can you tell us a bit about this new work? Why London instead of New York?

I wrote it as a follow-up to Thrill Me, but this story is contemporary and is an original story.  It is even more suspenseful and mysterious.

Flames was first produced in Iowa, which is in the Middle of the USA, and was later done in Louisiana  which is in the South.   The publisher of Flames, Samuel French Inc arranged for the London production at Waterloo East Theatre, which is a great theatre.

I have heard really great things after opening night, and it seems to be on it’s way to becoming a big success in London. Hopefully there will be a production in Madrid someday! At this time there are no plans for a New York production, but that could change.

Here is the synopsis:

One year ago, Edmond died in a horrible fire. He took with him the dreams of his fiancée, Meredith, the trust of his best friend, Eric, and the answers to the burning questions that still linger about his death and the terrible crime he committed. But on a stormy night at the cemetery where he rests, the secrets from his past will finally refuse to stay buried; and those he left behind will finally refuse to stay silent. In this original, suspense-filled musical thriller there are enough twists, turns and surprises to keep the audience guessing up until the final shocking moments.

The Canadian production is also premiering soon. Is it going to be a new version or a replica?

It will be a new version, which I am very enthusiastic about.  It will be in Montreal and will feature a local celebrity as the leading lady.

Is there any new musical you’re working or plan to work on soon? Are there any other professional plans apart from writing and composing ?

Yes, I am very excited about my new musical MONSTER MAKERS, which is three mini musicals.  Here is the synopsis:

In 1920s Germany, will director F.W. Murnau lose a lawsuit brought by the estate of Bram Stoker over his silent vampire film Nosferatu, which is suspiciously similar to Dracula? Will all of the prints be destroyed?  In 1930s Hollywood, will make-up man Jack Pierce create the defining look for Frankenstein’s monster, or will the studio impede his efforts? Will he get the credit he deserves? In 1970s England, will actor Peter Cushing be able to finish the final British sequels to Frankenstein and Dracula, or will outside forces get in his way?  Will his horror fans be disappointed? Will all of these men triumph as they fight for their art against the various “monsters” they must face?  As these famous monster-makers discover, sometimes real life can be more frightening than the movies!

I was also commissioned to write my very first non-musical play which is called ESCAPE and will soon be published by Playscripts Inc. I have no plans to direct, writing and composing keeps me too busy!